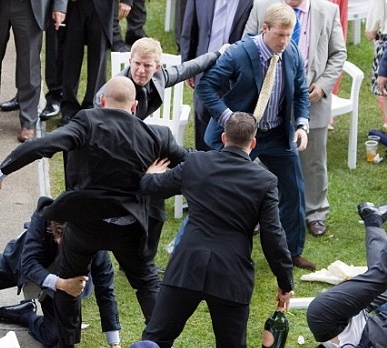 his fist missed my face by milometers but his huge frame still smashed into my body like a freight train hitting a stranded car on a crossing, over the desk we both tumbled and he landed on top of me. As soon as the dust had settled there was a large crowd of employees who gathered around, like wolves in a pack hunting a deer and then the fists and boots started piling in.

When I’m angry I’m strong, I can only liken it to the incredible hulk and I don’t feel any pain, well I do but only afterwards. Managing to get to my feet, I also threw a few punches and as soon as I did the wolves dispersed and so I made my way out of the office door and to my car, with Jeff following right behind me.

That was the end of another job, which was a shame because I did actually really like working there. Although it was very long hours, the money was great, the job was fantastic and the perks were something else. The perks of being an Estate Agent are, there are a lot of lonely housewives who’s husbands or boyfriends are either working away or aren’t paying their wives or girlfriends enough attention, it was a very easy way of meeting girls/women. It must have been a week or two after this little fracas that I was with Jeff in my Golf Cabriolet driving down the Kings Road in London with the roof down. It was a beautiful sunny day, for those of you unfamiliar with London, the Kings Road is a very trendy and expensive part of London. There we were sitting in the traffic, music on and soaking up the rays when all of a sudden a shadow blocked out the sun and I felt this hand grab my tie and pull it very hard and tight, my body almost lifting out of the car. Then this loud voice bellowed out “YOU BOOT MY CAR…..YOU BOOT MY FUCKING CAR YOU CUNT!” and with that this face appeared in my vision and then I felt an almighty CRACK!

My body fell back into the seat of the car, my eyes were streaming, I couldn’t see anything and blood started pouring from my nose. It turned out that Burnie had been shopping in the Kings Road with his wife, had seen me driving down the road and come over to have a words because the company car that Jeff had been driving had a big dent in the drivers door. Burnie had it in his head that it was me that put that dent there, in actual fact it was Jeff, I didn’t even know about it. How humiliating, I’m sitting in one of the best roads in London, eyes and nose streaming after being headbutted and in full view of everyone…….

So what I did was contact a rival company, one that I knew Burnie hated and got a job with them, they took me on because they hated him and had heard what he’d done to me. I ended working in a different area, Hammersmith in West London. All this meant was I’d have to  commute to West London everyday from South London, which wasn’t a problem as I love driving, especially when the sun is out and the roof is off. Selling houses is the easiest job in the world, it doesn’t take any brains at all and I love meeting new people.

Now I bumped into an old friend one day in London, a guy called Dave Corbett (not his real name) and he lived in Nottinghill, not far from where I was working. Dave was a really cool guy, gorgeous looking (not that I’m saying that but all the ladies loved him), he was funny and just great fun to be around, he was a few years older than me, we used to hang about and go out drinking from time to time.

This one day he’d invited me over to his, we went out to a few bars, met some girls and were having a great night. We’d got these girls back to his but I had work the next day, so Dave suggested that I stay at his and so we all jumped into my car and headed down to South London to collect some of my stuff, so that I didn’t have to go to work the next day in the same clothes. Even though we’d been drinking all night I didn’t think that I was too drunk to drive, so we took the roof of the car as it was a warm night, cranked the music up and headed off to mine – you know you sometimes get a gut feeling saying this is not a good idea – well I just ignored it!! As we came to the roundabout in Hammersmith – I say roundabout, it’s more like a massive island with shops in the middle of it, as we drove around it I could see a Police Van, full of Police, trying to join the road. We w ent past it and no sooner had we I heard the sirens and then saw the blue lights. To be honest, I didn’t think they were after me as I was driving slowly, until I looked in my rear view mirror and all I could see was the grill of the Police van in it, with a copper pointing to the side of the road for me to pull over.

I said to Dave ‘just stay there’ and I jumped out of the car, as I closed the door behind me I noticed that all the Police Officers were also piling out of the van. Good evening Officer I said, what seems to be the problem? No sooner were the words out of my mouth the Cop asked if I’d been drinking? Oh shit, what do I say…….No I replied, I’ve just been at my friends home and we’re driving back to mine as I have work in the morning. Now while I’m talking to this Cop, the others are all over my car, the bonnet lid is up they seem to be very interested in something inside there.