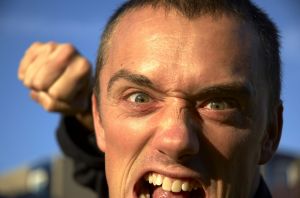 I’d been playing with soldiers one minute…….next I’m smashing heads on pavements!

Although Matt and I never did fight, we strangely enough became quite good friends but I still had a lot of trouble from other kids that didn’t like me. For some reason people just wanted to fight me – now I don’t know if it was because I came from a private school or if it was because some of the girls quite liked me. I was a new face in the later years of school, girls were curious because I was new, the same as boys would have been if I’d been a girl. The difference is, girls are just bitchy where as boys are just aggressive.

There was this kid, Warren (not his real name), who wanted to fight me, my first fight. I’d never had a fight before, not a proper one where you hit each other, I’d rolled around on the ground with people but I’d never actually hit someone. I remember saying to Matt, what do I do?? I’ll never forget his words, “walk up t0 him and just punch him in the face”! and that was what I did, my first fight and my first victory. Now I didn’t want to fight Warren, he did me and from that day forwards I never lost a fight…….as long as I’m right, then I cannot be beaten – you want to fight me, well you’d better prey that I stay down! What I worked out over time is, people don’t like to pick on people who appear crazy……and crazy I can be!

After that, I had people from other schools wanting to fight me, where ever I went there was always trouble – not because I wanted it, but because others did. I’ve got to say, it turned me into a bit of a nutter and I became uncontrollable – but what else was I to do? I had no one to turn to, I couldn’t go to my Mum or Dad and say, “mummy, I’m being picked on at school”…..well I could but then I wouldn’t be the person I am today….I’d probably still be sitting behind mummy, letting her live my life (which may not have been such a bad thing)

No, the way I saw it was the way I saw it – I’m not saying it was right and I’m not saying it was wrong, I believe this, if I’ve done nothing wrong and someone is looking for trouble, then they were going to get it. Who are they to bully me? I’m also the same if I see someone in trouble, I just can’t walk past I have to help – I’ve got myself into a whole heap of shit doing that too, but that’s another story.

Just so you can get a picture in your mind of my body size, not my looks, I’d say I’m built like Emilio Estevez (not his real name:). So I’m not a huge lump of a guy, I’m about the same stature as Emilio, so I think people saw me as an easy target to pick on.

Now, I was having fight after fight after fight – I’ll give you an example of a typical day for me at 15. I was sitting in a coffee shop talking to a girl when all of a sudden this group of guys came in saying that Ross (not his real name) wanted to fight me….who the fuck was Ross?? I had no idea, why would someone I don’t even know, want to fight me? Now this Ross was supposed to be some kind of hard nut, he had a skinhead and hung around with all the local, older undesirables – I didn’t know this at the time, until I went outside to fight! There he was, this tall, unkempt skinhead – we squared up to fight, he had all his supporters around him and I waited for him to make his move, he threw a punch and missed but mine landed square on his jaw, he then lunged towards me and tried to grab hold of my balls and face – I headbutted him, he went down like a sack of potatoes and then I jumped on top of him, anger coming out of me like a crazy man. I grabbed his head and repeatedly smashed it against the concrete floor until I FELT he’d had enough.

As I got up off the ground, his gang gathered around him, I half expected them to join in whilst I was fighting but they didn’t……his girlfriend walked up to me and just spat, right in my face – there was no need for that, I didn’t ask for the fight! I wanted to knock her out too but, I’d never hit a girl,  so I just turned around and walked away.

At school I’d get angry with teachers if they told me what to do and make a REAL nuisance of myself – one teacher I threw a chair at, Mr Evans (not his real name), always used to wear the same clothes to school every day and what made it worse was, he had awful body odor. Surely one of the other teachers would have told him, he’s supposed to set an example of how we should be as adults. Anyway, he said something to me one day and that was it, after telling him how bad he stunk I launched a chair at him……..I was suspended from school for a few weeks and told I couldn’t come back unless I saw a Psychiatrist…..great, they think I’m crazy too! To be honest, if you knew me back then, I was probably borderline – but I didn’t think I had the problem, it was everyone else! Just for the record, I must point out that when I did return to school, Mr Evans never did smell again – something good came from something bad, although I can not justify my actions, I should have had more respect for him.

Fortunately or unfortunately, I met this girl, Michelle (not her real name)and she changed my life at school, I calmed down a lot and we’d just hang around with each other outside of school. But instead of getting into fights I started to find myself getting into all sorts of other trouble. Michelle was gorgeous, very calm and perfect for me in every way, we just clicked – like an innocent Bonni & Clyde. Sadly Michelle had lost her mother just before we met aged 13, she was troubled too but differently and quite rightly, but we kind of had the same backgrounds, she’d also come from a private school, had an elder sister who was very different to her, now Sonia (not her real name), she was mad!

You see, Michelle used to ride her sisters moped when she was only 15 – this one day she came to the youth club on it and I went outside to talk to her. She disappeared up the road and the next minute I heard this almighty bang. I ran down to see if she was alright…..there she was laying inside a skip that was on the road. You see, with the dim lights on the moped, she hadn’t seen the skip, she hit it and was catapulted inside – fortunately she wasn’t injured……but it was funny, although I don’t remember her finding it quite as amusing as me!!

Now, I think this is where I started to go off the rails a bit more……not that I blame her, she was perfect, it was me that was messed up……