Part 8: First encounter with the Police…… 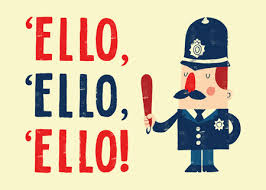 I knocked my poor old Dad spark out………something that haunted me for many years…..

Understandably my Mum & Dad had finally had enough of me, I was literally out of control. At school I was disruptive and at home I was certainly no better. My father and I did not see eye to eye, I’m ashamed to admit it but I actually stuck my Father once, so badly that he blacked out. I’m not going into details here, not now anyway, but it saddened me until later in my life that my Father was scared of me – that’s an awful thing to see, a man who’s done so much for you, cower when you get into an argument….and I’m ashamed of my actions to this day – although I did later on in life say to him, ‘would you forgive me for what I’ve done to you in the past’? He looked me and said ‘Don’t be so bloody silly, of course I forgive you’ – and that lifted a great weight off my shoulders that I’d carried for a long time.

I make out that I’ve been a really bad person so far, and I leave it up to you to judge, hopefully you won’t until you’ve finished reading all I’ve got to say (human nature says you already have though).  This after all is my story, my life and I want to paint a picture so that you can understand how I got to where I am, that’s why I’m telling it like it is, in black and white. I had my reasons for being violent, yes my outbursts were sometimes justified but I was also a loose cannon, a ticking time bomb, slightest thing and BOOM, I’d go off on one.

Anyway, back to the plot…..I was taken to the local Police station by my Mum. The Custody Sargent came out and I was whisked off to an office with two coppers sitting in it. I don’t recall the full story but a brief synopsis. I think my Mum had called them and told them what I’d done, they couldn’t press charges unless my parents wanted to, which of course they didn’t, this was just a scare tactic I think.

This fat Cop started talking to me with a raised voice while the other one just sat, looking dim, nodding his head in agreement with whatever the other one was saying, good cop bad cop scenario. I wasn’t scared, I think I mouthed something back to him, well, he turned to my mother and asked if it was OK for him to hit me, my mother agreed. Although he never did, he came right up close to me and carried on ranting and raving, with spit flying out of his mouth, as he yelled in may face, about right, wrong, the law and how I could have killed someone…….looking back at it now, I was such a cock……but at that age, with everything that I was going through in my life, well……this is how I ended up where I am. Foresight, if only I’d listened to him back then……may be a man wouldn’t have died! I don’t know who at that age had someone that they could talk to or listen to for advice……..although I had friends I didn’t have anyone who would understand what was going on in my life,  I was getting into trouble more and more at school, I couldn’t be told anything by anyone – and this was so unlike me compared to a year or so before. Where did it all go wrong??  I certainly don’t feel sorry for myself, I had a very privileged upbringing, compared to a lot of people in the world but money can’t buy you happiness, psychiatrists can’t solve your problems, you have to choose a path and go along it your way, right or wrong……I’ve just chosen a few more wrong paths than I have the right ones, but when you’re young you think you know best – and that doesn’t necessarily change as  you get older! My Mum and Dad grounded me for a whole month, I was suspended from school and so had to help around the home doing work to pay back for the damage that I’d caused to their car. Every morning around 7am I’d ring the doorbell at home and my mother would come down stairs and let me in. ‘Where have you been?’ she asked the first time, ‘Oh just jogging’ I said and that was that, no more questions. Really what I was doing, as soon as they went to bed around 9.30pm, I’d climb out of the bedroom window, over the garage and clamber down a tree. I’d walk to the nearest phone box, yeah before mobile phones were invented, and ring Michelle, who’d either drive her sisters car to come and collect me or her sister would pick me up. We had some crazy times at her house, I’d stay the night and then go home in the morning. Funnily enough, my Mum doesn’t know that I did this until this day…….then again, she’s not reading this so she’ll probably never know…..and even if she did, I’m a bit old to be told off for it now.

Although my parents were dead against motorbikes, they bought me one for my 16th birthday – I think they decided to get me one because it would give me independence but more importantly, stop me driving their cars……

I had an Yamaha RD50 in white, I loved it for the first few months but it was so slow, I tried to do something with the engine to make it faster – I was a bit of a speed freak. Out of nowhere, I came up with an idea for how to get a faster motorbike. I have no idea how I thought of it…..I’d never stolen anything in my life before, actually I lie, I stole a rubber from Martins newsagent in Lindfield when I was about 9 years old – but I took it back the next day because I felt so guilty. A rubber was nothing to what I was about to do next……..