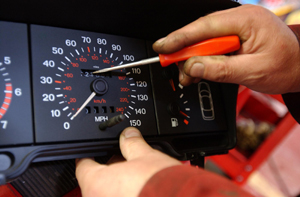 The first car I bought, at 16 years of age, was a Triumph Herald from this dodgy little auction, I drove it around until I crashed it…..

I turned far too fast into a corner and she just carried on going straight, hit this mud bank and the front end just folded up. I got out, dusted myself down and just left it there, steaming away. When I went to buy my second one, the owner of this auction came up to me and asked if I was interested in working for him. I mean at 16 I must have looked my age but this guy said to me that he liked the way I could get into any car and drive it, they were short of drivers and he’d pay me a tenner an hour so, obviously I jumped at the chance. I’d turn up on a Thursday, drink tea with him and then when the auction started, they’d hand me a key and I’d just have to drive from where it was parked, show the car to the punters, wait until the bidding was over and then drive off and park up. All I had to do was keep repeating this until the auction was over. That was all the work involved, I didn’t have to clean the cars, just drive them…..I was in heaven, although the cars were pretty shit, I didn’t mind as I’d drive anything. I’d get deals on cars that I bought from him obviously, I say deals, he’d be lucky to give most of this crap away!

The guy who ran the auction was a very, very strange man, ginger hair and a very odd face, not that I cared about his appearance, who would you expect to be running a car auction in Burgess Hill…..Brad Pitt! We got on very well, I don’t know, he liked me for some reason, was always very keen to teach me the tricks of the trade, things that at that young age, I probably shouldn’t have known.

So by the time I was 17 I knew how to turn the clocks back on cars, replace vin and chassis numbers, this is basically the identity of a car and by changing these you effectively give it a new identity. I often wonder why he showed me all of these tricks, I figured it out later on in life…..

…you see, there’s that  saying, like minded people always meet like minded people – so I guess, if I was switched on, I should have known that I was on a very steep slippery slope to big trouble, although I think I kind of already knew it. At that age though, you’re always trying to beat the system, well I was, and this guy showed me exactly how to do it. My Mum asked me once what did I do at the auction, I told her I was a valet because I don’t think she’d have let me do it if she’d known.

I stayed there for a while, learnt everything I thought I needed to know and then just never went back…..once you’ve driven one piece of shit, you’ve driven them all and he was a little odd, to put it mildly.

I’d been going to Next in Brighton buying my clothes, Next was the latest must have fashion outlet at the time. Buying some clothes there one day, this very camp, older man said to me as he was serving, do you want to work here on a Saturday? We chatted for a bit, he told me I’d get free clothes to wear in the shop, you had to wear Next items working there and that I’d get a good discount on any other purchases that I made. Seemed to me like a good place to work, they played great music, I loved the clothes so I agreed.

The longer I worked there though, the more I took the piss. Before long I was wearing clothes out under my clothes, I’d get friends to come in and I’d give them bags of clothes to take away. I’d let people give me cash for clothes and not ring it through the till and how I got caught was, I bought some shoes, hid some shirts that I wanted inside the shoe box and as I left that night, they did a random search, which they’d never done before……..