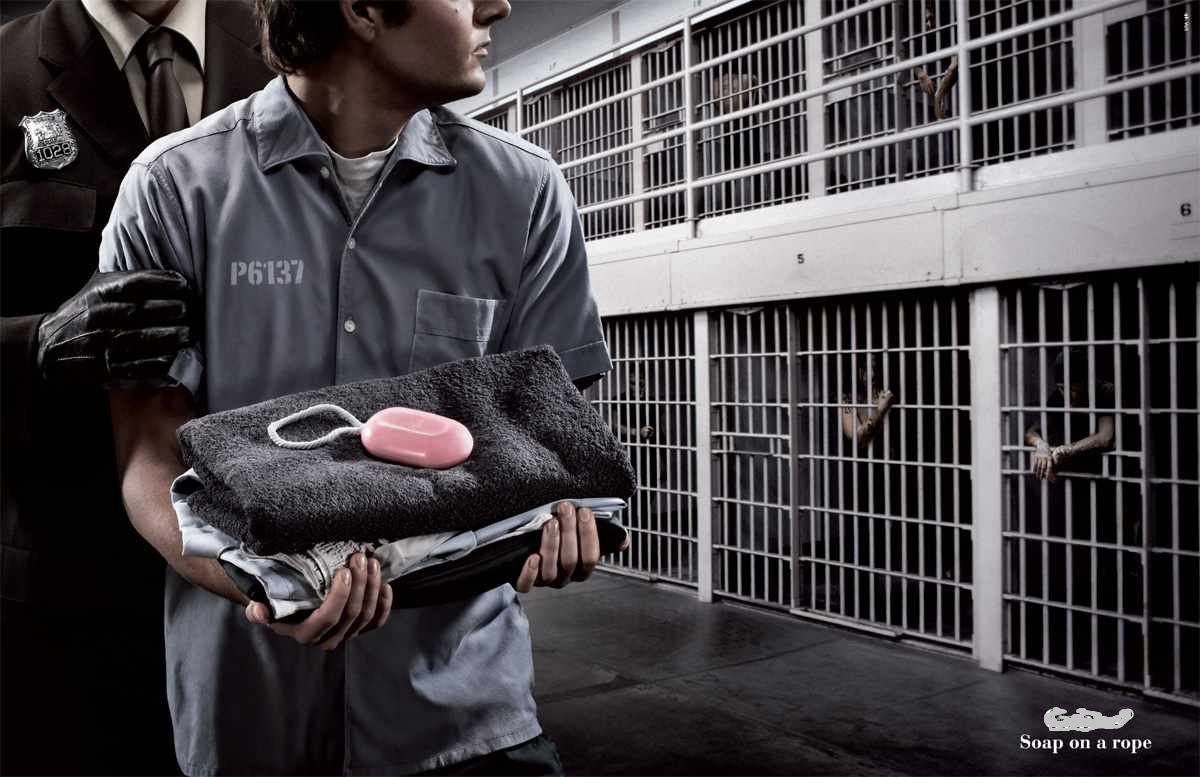 When I first went into Prison my brother sent me some soap on a rope, he said that you don’t want to be bending over in the Prison showers…..which brings me nicely to a shower story…………

I’ve got to say that there was never any need for soap on a rope, it was nothing like that in jail, I never once had anyone try and rape me….. although there was this one day I remember. I was in the shower when a couple of guys burst in, in each hand they had bowls full of rice pudding which they chucked at me, absolutely covering me in this gluey glop – I think that was my worst experience in the prison shower….no no hold on a moment, there was one really bad incident which I forgot about…. I was in the shower this one day when all of a sudden the door flung open and in rushed this inmate, he grabbed all of my clothes and my towel and then ran back out again. I stood there shouting, yes very funny, well done…and waited for them to come back in again and bring my towel….I waited……..and waiting but nobody came back. So, after I’d finished in the shower I walked, totally naked back to my cell and would you believe it, yes, they’d locked my cell door too! So there was no way I could get back in to my cell to get some clothes…..so what did I do? That’s right, I had to walk round to the screws office and ask them to open my cell. As I approached their office one of the screws caught sight of me completely naked. He did a double take and then turned round to the other officers, laughing out loud, he poked another screw who was standing next to him saying, ‘look at this cunt’…and then he looked at me and said “what are you doing Pierce”?? To which I replied, would you mind opening my room, I’d like to get a towel! Oh did we all have a good laugh…..they more than me I think.

They were good fun days, it was just like being at an adult boarding school………the only way I can describe it is, if you have to be in Prison, just make it the best fun that you can…..otherwise you’re just going to end up with a shit memory…….and who wants them!!

I seemed to gain respect from people again, word got round that the screws had tried to enlist me as a ‘supergrass’ but word had gotten around that I’d told them where to stick it! I became friends with this guy called Terry, he was 6 foot 5 inches tall, not the biggest or meatiest of guys but he sure had one nasty mean streak inside of him, one that I’ve ever witnessed before on anyone, even me. His face told a thousand stories, most of them would be nightmares to you and me, but we got on very well and we started spending a lot of time together. He was intelligent, loved reading books, unlike me, we came from very different backgrounds but it felt as if we’d known each other all our lives. He was from a very tough, proper East End of London gangster type of family (4 brothers and a sister, all in prison, one for murder) and this family had connections to people I’m sure you’d have heard of, but I’ll tell you more about him and them later.

As I was a D cat prisoner in a C category prison, I was the only inmate in the prison allowed to go on the outside of the prison walls to cut the grass and do odd jobs. They also had sheep which I’d have to look after too (don’t ask me why they had sheep, they just did). It was an interesting job, they’d take me out through all the security and then once outside they’d let me drive the tractor, or lawnmower and off I’d go and do my job. I’d have to collect litter from the grounds and empty the bins too. After a couple of weeks settling in I realised that if I had packages left outside, then I could hide them in the rubbish and take them back inside the jail for myself. It doesn’t seem believable but it’s true, it was that easy to take things back inside the jail – if I was the wrong kind of prisoner I could have taken guns back in – but fortunately for these prison guards, I wasn’t that bad!

The screw that was in charge of me wasn’t the sharpest knife in the block, Mr Jessop, or Tony as I used to call him (obviously not his real name). He was a ginger man, very scared, timed and shy, would hid behind his badge. Well he used to come and collect me for work in the morning, I should have reported to him but he used to have to come and find me. For example I’d be playing pool and he’d turn up to get me for work and the inmates I’d be playing pool with would say, ‘you’re boyfriends here’ when Tony turned up and he’d go all red and get embarrassed. He was a decent enough chap, I remember him saying to me that he has to watch out for people like me because we groom officers like him. Admittedly I took full advantage of him – well you have too in these situations. He used to let me get away with murder, not literally, but my work load became easier and easier the more I got to know him, which didn’t take long.

I used to get packages left for me in the bins outside the prison, they’d be left inside empty crisp packets and all I had to do was smuggle them back inside on the back of the tractor or lawnmower, or even in my shoes (depending on what I was smuggling back in). This meant that I could buy anything and anyone I wanted in jail. There was this kid, Hughy Delaney (not his real name), he was 5’2” tall but he was a light weight kick-boxer, he was quick like lightening on a punch bag, trouble was, he was a scag-head (phrase for someone addicted to heroin). Now I used to lend him phone cards so that he could buy his scag and he always, always paid me back. I’d lend him 20 cards at a time, the way I saw it was, better to get on with them then to not and they never gave me trouble – unlike my mate Robert Nellon (certainly not his real name).

Robert was a typical Essex boy, in for dealing large quantities of drugs (connected to the Essex boys gang that were executed in their Range Rover in the 90’s) and he thought he was a bit of a hard nut, he gave a good swagger anyway! We used to go on the punch bag every day and he really thought he was a bit tasty, compard to me he definitely was. Well, one day he got on the wrong side of Hughy and his little scag team. The story goes that, he was sitting in the TV room and these four guys came in and kicked seven bells of shit out of him – I never found out the full story why they did it (I could guess as Robert thought a lot of himself) but poor old Robert had a black eye almost as big as the moon -I mean his whole face ballooned and swelled from the kicking that Delaneys gang had given him.

Trouble is, people get greedy and I think Hughy thought instead of asking me for phonecards, that he’d just take them. I used to leave my cell door open, yeah the place is full of criminals but there is, or so I thought, there was this code of honor,  don’t steal from each other….or something like that……but there isn’t – especially if weak people are hooked on something….like class A drugs!! This one day I walk back into my cell and there was Hughy, who turns round and looks very sheepish at me as I walk in. “What the fuck are you doing in here” I said”? He looks at me and without speaking just unrolls this towel that’s sat next to him on my bed. Inside was my DVD player and some phone cards. Now if you’ve ever been in a situation like this before, then you’ll understand just how scared/worried and very, very angry I was. I was thinking, OK this guy can fight but if I get in there first I’m going to be OK. So I lunged forward at him with all my might and we ended up on the floor, which turned out, was to my advantage . I was punching him, head butting him so that he could not get up. Now when I’m angry I make a hell of a noise, I can only say that it must be a natural thing because, I’ve been told that it puts fear into people who’ve been on the wrong side of me, shits them right up. Alarm bells were going off and I remember this screw shouting at me to get off him but before I did, I wedged my index finger so far into his eye socket that he shrieked like I’ve never heard a shriek before…………next minute we’re both marched off to the block to wait for the Governor to see us…….you see, you get shipped out of Prison for fighting and moved back to where you came from, BRIXTON, oh no!!!!