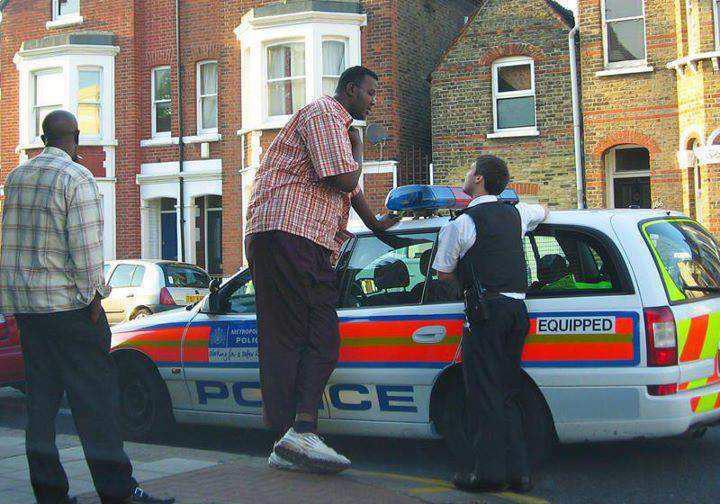 Him and his angry mate proceeded to jump out of the car and head towards us, I think they were a little upset, to put it mildly and they were huge guys too………. One of them approached the passenger side where Rupert was sitting, to my amazement he pressed the door lock! This was a guy I thought could handle himself in a fight, I was shocked but then again this bloke was MASSIVE …being an understatement! As the guy jerked on the door handle to open it, I just stuck the car into reverse and put my foot flat to the floor. As we hurtled backwards, I yanked the steering wheel as sharply as I could and pulled the handbrake up, whilst putting my foot down on the clutch and sticking it into first gear, this old Renault 5 skidded completely round and faced the other direction and off we went, as fast as we could. I’d only ever seen that in a Bond film before, not that I think I’m James Bond, well may be I did for a minute when I pulled this trick off.

My one regret in life was that I never pursued my dream of becoming a racing driver. I think it’s easier now a days to follow your dreams, what with the internet, you can make contacts a lot easier today than you could 30 years ago. Well, I say that but I’m sure if I had really had the ambition to do it back then, I probably could of but when you’re young, unless you have people pushing you into the areas that you want to go, then you don’t believe that you can do it and so I didn’t, sadly.

I never did crash my sisters car in the couple of months that she’d lent it to me, she was one of the lucky ones. My Father was a metal trader in London and one day he came home in a BMW 323i, it was a company car that the company had spare and he said I could use it. Wow, I was in heaven, 17 years old and driving a BMW, how lucky was I – or how foolish were my parents?

The funny thing was, I didn’t really drive this car that crazy, I actually looked after it because I felt I was  incredibly privileged to be allowed to drive it. Obviously I did drive it from time to time quite fast but not taking silly risks that I thought, and I’m pretty sure after you’ve been reading this, thought I would too. I never used to drink, I’d go to the pub and have an orange squash, cost about 15p back then, because driving was much better than drinking.

I left the pub one evening and showing off, wheel spun all the way down the road, black smoke in the rear view, was all I could see. As I got down the road, a Police man jumped out into the road waving his arms, I swerved around him and headed home, no way was I stopping. About an hour later a Police car pulled up at my parents house wanting to speak to me. My father came and got me from my bedroom and told me that the Police wanted to question me about an incident that had happened a little earlier. I went down stairs and there was this copper, who asked me if I had been at a certain location at a certain time. I told him that I had been and he then asked me had I not seen his colleague standing in the road? I replied no. My Father then asked the Policeman, had the Officer that he claims ‘jumped out in front of my car’ been wearing a fluorescent jacket? To which this Cop said yes he had. That was a blatant lie and I told him so, I said that no one with a fluorescent jacket had tried to stop me and had I seen one, I obviously would have stopped.

I was charged with failing to stop but when it went to court it got thrown out because the Police retracted their statement, saying that the officer was wearing a fluorescent jecket, because he wasn’t. Even though my Father and I didn’t see eye to eye, he was always there for me whenever things got bad…….but really, I should have been punished because may be things would have been different, very different.

I picked my mate Jeff up one evening as we were going to drive around and find a nice pub to go to. It was my Mum and Dads 25th wedding anniversary but I didn’t want to be around for that. Off we headed up this county road in search of a place to go. It was dark outside and I had my headlights on, not driving crazy but doing around 70 mph, music blaring and life was great. As I drove along this country lane, from the opposite direction, suddenly appeared to be a very large car, I couldn’t work out what it was, it seemed to have two sets of headlights. Jeff, still to this day, says that I sped up but I didn’t, I know that I just carried on driving at the speed I was doing until I suddenly realised what it was, it was a car overtaking another car. I don’t know how I managed too but I swerved at the last second just before impact………..