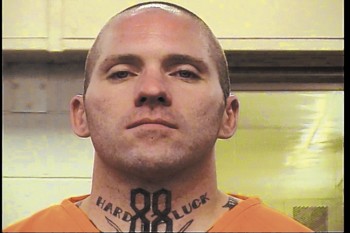 I hadn’t had anything sweet for days, they were only the plain digestives but i was so looking forward to eating them. On my way back to my cell I walked past this muscle bound skinhead, who only just decided to turn around and closely follow me back, as I walked in proceeded to push me into the cell and then push the door shut behind him, he looked menacingly at me and then growled……….

…..’give us a biscuit’! Sounds petty now but at the time I was thinking oh shit, I really don’t need this, defiantly I said ‘NO’!, I’ll admit I was scared…. Again but just louder and more meaningfully he said, ‘GIVE ME A BISCUIT’ and then gradually he started moving closer towards me! Before I could get my next word out, my cell door suddenly flung open……but this time it was a screw (prison officer). Oh my god, the relief……He looked at me and then looked this skinhead up and down and said, ‘what you doing in here Barnes’? (not his real name) Barnes said, ‘I’ve come to see my mate’ and then looked at me for approval. The screw looked Barnes up and down and sternly said ‘get the fuck out of here, he ain’t no mate of yours’ and with that Barnes turned and left. The screw said to me, ‘you’ve got to watch these scagheads (junkies) in here, they’ll rob you blind’. I was like, ”thanks’, he smiled and said, no problem Pierce, no problem’.

As the screw left the cell Roy came in, he’d waited outside until the coast was clear. He was like what was that all about so I told him what happened and he quipped’, what a nightmare this place is going to be……’

Anyway, I got to hear that if you get a job inside and work, you’re not on 23 hour bang up – basically this means that you are locked in your cell for 23 hours a day – so I put my name down for a job and soon enough they put me in the kitchen. My job was on wash-up – fortunately they had this massive machine where one of you load the dirty lunch-trays in one end and the other stacks them when they come out the other end. Well you’ll never guess who was also doing the wash up with me???  OK I’ll tell you, that massive black guy I came in with…….turns out his name was Sid (not his real name), or to his buddies on the street he was known as ‘Turpin’ – as he liked to rob people, like ‘Dik Turpin’ (that is his real name). I can only imagine how effective he was at his career choice – he’d be the last person you’d ever want to meet in a dark alley…..come to think of it, he’d be the last person you’d want to meet in any alleyway!

With the new job came a new wing and a single cell, Roy was left to fend for himself and the job meant more free time to play snooker, yes they had snooker tables on this wing or I would play cards, there was even a TV room – you see you get privileges when you work in jail – something that a lot of the lazier people in there didn’t grasp the concept of!

Turns out me and Turpin, well we became good friends, he used to call me ‘Doris’, no I wasn’t his bitch, I like to think I was like the only authoritative figure in his life that he respected, his mum. We used to fill our time playing cards with him and his mates – one mate of his was called Linton (not his real name). He was about 6 foot 7 inches, where as Sid was 5 foot 4” but he was 6 foot wide, he was huge – and boy did we had some fun. I remember my first prison visit by my Mum and Dad, they came all the way up to visit me, only for me to go out, hug and kiss them both, tell them that I was OK but that I had to go as I was in a big game of cards for lots of Mars bars…oh my first Mars in Prison was like your first kiss, you’ll never forget it…..anyway we had an emotional embrace and then I went back to the wing to finish off my game of cards. Look, when you’re in jail that’s where your life is, it’s upsetting to hear about what’s going on in the real world, I didn’t care, I was just making the best of a bad situation.

Now in the old days in prison, not now, you could spend as much money on canteen as you had in your account – so I had loads of phone cards and tobacco, which is like currency. I was lucky – most in there are not as fortunate – but when you have money you had better make sure you get protection otherwise you don’t have your belongings for very long….BUT I had Sid and Linton on my side so things were good. I’d lend people tobacco and they’d pay me back what I’d lent them without fail until one day when Sid said to me, what you doing giving these people phone cards or tobacco or stamps and not getting anything back. Sid was like, we’ll collect your debts each week……..so they would go out and collect. They would collect what I was owed and then the same again as interest on my loan, the official prison term was Double Bubble.

So what I would do to make sure that I was always taken care of was give half my profit to Sid and Linton for collecting my loans because in jail, people will take advantage of you if they feel they can. So these guys worked perfectly for me, to be honest, after a while I looked like I was running the joint and no one bothered with me. Of course this all came to an end one day because, a screw came up to me and said – Pierce, you’re wanted at the Governors office – what for I said – he replies, I don’t give a fucking shit Pierce just get down there!!

The Gov says to me – “Pierce, you’re being moved to HMP (Her Majestys Prison) Wayland.”

“Norfolk!!! , why Norfolk, every other scumbag is being moved to Spring Hill, why are you moving me there??” Now Spring Hill was a nice cushy open prison where everyone else was being moved to, real criminals, me I’m in jail for an accident!!!

Me – “a security risk” I blurted, I’m a fucking security risk if I drive myself there – YOU FUCKING DICKHEAD!’ I replied angrily.

I tried to explain to him that my father was old and going in for an operation soon to have a couple of fingers amputated, he might not make it through the operation and that he won’t be able to come and see me if I’m in Norfolk – it’s quite a long way from Sussex, about 3 – 4 hours in a car. It was at this point that I saw a cloud of red mist, I could feel this rage creeping up my body, I abruptly stood up, my chair went flying back into the screws standing behind me and I yelled,

“Let me get this right, you idiots want to send me up to some cat C prison when I’m a D cat, low risk prisoner” I turned around and just lost my mind even more, pushing the screws out of my way as I ranted “YOU FUCKING WANKERS”, over and over again, shrieking at the top of my voice, spit firing out of my mouth the more angry I got. As I was bounding back to my cell, I was shouting, screaming like a mad man the whole time, alarm bells started going off and the screws were shouting at everyone who was out to get back in their cells. I turned round to face this screw that was speeding up towards me – he shouted get in your cell Pierce – I just screamed in his face, spit hurling out if my mouth towards him, he stopped dead in his tracks and flinched as I was yelling abuse at him, fists clenched like I meant business. Afterwards I was a little shocked at my reaction to this situation, especially given the circumstances of where I was, but at the time, when I lose my mind I can REALLY LOSE MY MIND. When I got to my cell I slammed the door shut and sat on my bed, panting, gasping for breath, I was so angry ‘fucking security risk’ I screamed. Next minute I could hear all this commotion going on outside my cell and the door burst open. There were 6 or 7 screws dressed in riot gear with shields, with the Gov centered in the middle of them. I stood up, still shaking with anger and shouted “fuck off you pricks” as loud as I could, standing with my fists clenched and spitting venom at them all. The Gov looked at me and said in a stern voice, “sit down Pierce, and don’t be silly”. I looked at him and went, “look at you bunch of sad cunts”, fists clenched ready to take the world on!

‘Now calm down Pierce, let’s not get out of control’! the Gov said calmly…….I stood there and hurled more abuse at them, screaming obscenities……The Governor looked me up and down and then in a much deeper tone of voice, like he really meant business this time and growled…..